May 29, 2018 08:30:24 AM – The Fake Mainstream Media has, from the time I announced I was running for President, run the most highly sophisticated & dishonest Disinformation Campaign in the history of politics. No matter how well WE do, they find fault. But the forgotten men &amp; women WON, I’m President!

May 29, 2018 06:27:07 AM – Sorry, I’ve got to start focusing my energy on North Korea Nuclear, bad Trade Deals, VA Choice, the Economy, rebuilding the Military, and so much more, and not on the Rigged Russia Witch Hunt that should be investigating Clinton/Russia/FBI/Justice/Obama/Comey/Lynch etc.

May 29, 2018 06:09:32 AM – Why aren’t the 13 Angry and heavily conflicted Democrats investigating the totally Crooked Campaign of totally Crooked Hillary Clinton. It’s a Rigged Witch Hunt, that’s why! Ask them if they enjoyed her after election celebration!

May 29, 2018 06:00:02 AM – The 13 Angry Democrats (plus people who worked 8 years for Obama) working on the rigged Russia Witch Hunt, will be MEDDLING with the mid-term elections, especially now that Republicans (stay tough!) are taking the lead in Polls. There was no Collusion, except by the Democrats!

May 29, 2018 05:49:23 AM – “This investigation involved far more surveillance than we ever had any idea about. It wasn’t just a wiretap against a campaign aide…it was secretly gathering information on the Trump Campaign…people call that Spying…this is unprecedented and scandalous.” Mollie Hemingway

May 29, 2018 05:30:32 AM – We have put a great team together for our talks with North Korea. Meetings are currently taking place concerning Summit, and more. Kim Young Chol, the Vice Chairman of North Korea, heading now to New York. Solid response to my letter, thank you!

May 29, 2018 05:07:26 AM – Democrats mistakenly tweet 2014 pictures from Obama’s term showing children from the Border in steel cages. They thought it was recent pictures in order to make us look bad, but backfires. Dems must agree to Wall and new Border Protection for good of country…Bipartisan Bill!

May 28, 2018 04:53:56 PM – California has a rare opportunity to turn things around and solve its high crime, high tax, problems – along with so many others. On June 5th., vote for GOP Gubernatorial Candidate JOHN COX, a really good and highly competent man. He’ll Make California Great Again!

May 28, 2018 04:22:15 PM – A Democratic lawmaker just introduced a bill to Repeal the GOP Tax Cuts (no chance). This is too good to be true for Republicans…Remember, the Nancy Pelosi Dems are also weak on Crime, the Border and want to be gentle and kind to MS-13 gang members…not good!

How do you settle a presidential election when the vote is too close to call? With a fishing contest in northern Wisconsin in the winter, of course! After the first round of votes were counted, Hillary and Donald were extra deadlocked.

Instead of going through a recount, they agreed to a week-long ice fishing contest to settle the election. Whoever caught the most fish at the end of the week would be the President-elect.

They decided that a remote frozen lake in northern Wisconsin would be the ideal place. No observers on the fishing grounds, but both would need to have their catches verified and counted each night at 5 PM.

That night, Hillary and her cronies got together and accused Trump of being a “low-life, cheat.” Instead of fishing on Day 3, they were going to follow and to spy on him and figure out how he was cheating.

Day 3 finished up and Trump had an incredible day, adding 50 fish to his total.
That night, Hillary and her democratic cohorts got together for the full report on how Donald was cheating.

Hillary stood up to give her report and said, “You are not going to believe this, he’s cutting holes in the ice.”

And this story explains the difference between a businessman and a career government politician. 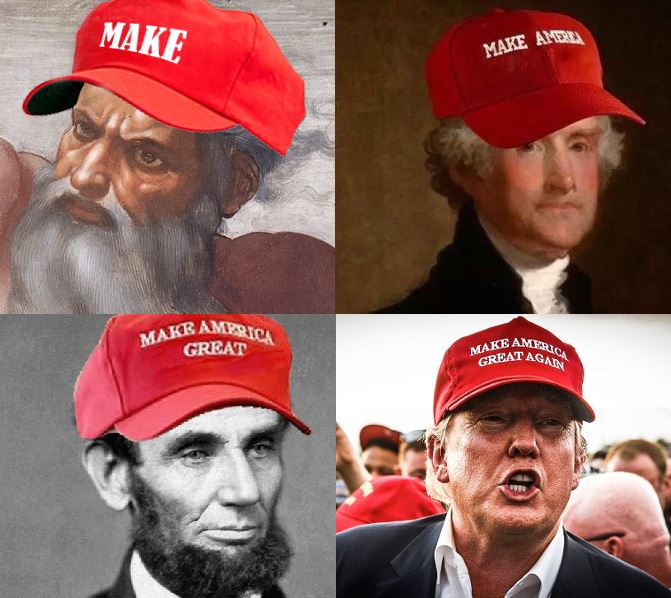