Trump puts them in the DOGHOUSE

Aug 30, 2018 07:54:13 AM – Wow, Nellie Ohr, Bruce Ohr’s wife, is a Russia expert who is fluent in Russian. She worked for Fusion GPS where she was paid a lot. Collusion! Bruce was a boss at the Department of Justice and is, unbelievably, still there!

Aug 30, 2018 07:12:22 AM – I am very excited about the person who will be taking the place of Don McGahn as White House Councel! I liked Don, but he was NOT responsible for me not firing Bob Mueller or Jeff Sessions. So much Fake Reporting and Fake News!

Aug 30, 2018 06:44:28 AM – Ivanka Trump & Jared Kushner had NOTHING to do with the so called “pushing out” of Don McGahn. The Fake News Media has it, purposely,so wrong! They love to portray chaos in the White House when they know that chaos doesn’t exist-just a “smooth running machine” with changing parts!

Aug 30, 2018 06:20:48 AM – The news from the Financial Markets is even better than anticipated. For all of you that have made a fortune in the markets, or seen your 401k’s rise beyond your wildest expectations, more good news is coming!

Aug 30, 2018 06:11:58 AM – I just cannot state strongly enough how totally dishonest much of the Media is. Truth doesn’t matter to them, they only have their hatred & agenda. This includes fake books, which come out about me all the time, always anonymous sources, and are pure fiction. Enemy of the People!

Aug 30, 2018 06:02:16 AM – What’s going on at @CNN is happening, to different degrees, at other networks – with @NBCNews being the worst. The good news is that Andy Lack(y) is about to be fired(?) for incompetence, and much worse. When Lester Holt got caught fudging my tape on Russia, they were hurt badly!

Aug 30, 2018 05:50:20 AM – The hatred and extreme bias of me by @CNN has clouded their thinking and made them unable to function. But actually, as I have always said, this has been going on for a long time. Little Jeff Z has done a terrible job, his ratings suck, & AT&T should fire him to save credibility!

Aug 29, 2018 08:51:50 PM – …charge of the FISA court. He should direct the Presiding Judge, Rosemary Collier, to hold a hearing, haul all of these people from the DOJ & FBI in there, & if she finds there were crimes committed, and there were, there should be a criminal referral by her….” @GreggJarrett

Aug 29, 2018 08:43:30 PM – “Ohr told the FBI it (the Fake Dossier) wasn’t true, it was a lie and the FBI was determined to use it anyway to damage Trump and to perpetrate a fraud on the court to spy on the Trump campaign. This is a fraud on the court. The Chief Justice of the U.S. Supreme Court is in…… 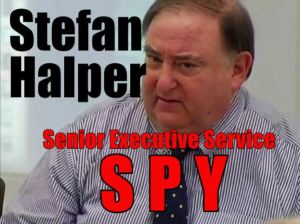 “Journalist” Sara Carter has an article out on Stefan Halper, claiming that he has significant ties to the Russian government. See here.

Don’t be fooled by this sophomoric description of Halper that this thespian is reporting.

Remember that Halper is a total CIA asset. We wrote about him awhile back and he is very connected – from Senior Executive Service to the Queen.

Maybe Sara Carter is also a CIA plant? Is she trying to protect the CIA’s very important asset – HALPER? Certainly wouldn’t be the first time the CIA planted a reporter into the newsroom.

Who is Stefan Halper?

Check out this glass bead written by one of our AIM4Truthers:

What Would Jesus Do?

“It’s horrifying to think what these men of God did to these children, and then to have the cover-up that was quite literally purposeful to shield priests from law enforcement,” he said.