How to make the frame up of Donald Trump stick using Carter Page’s naive attachment to making Russian energy deals. Carter Page was an FBI cooperating witness in 2015. 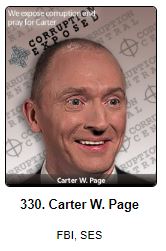 The FBI knew that the Russians were never interested in recruiting Carter W. Page, but rather only played with him to see if they could squeeze some funds out of him with “empty promises.” BECAUSE OF THESE interviews, Page became their best patsy given all his trips to Moscow. It appears that the Queen’s chief prosecutor, Alison Saunders, came over for “Dinner with the Ohrs” to coach Bruce Ohr on how to make the most from the Trump Tower set up and give her equal, Sally Yates, deniability and distance in order to approve the FISA warrants against Page starting in Oct 2016 (although the first request is said to have occurred in June, just after “Dinner

“writes to me in Russian [to] practice the language”

“He files to Moscow more often than I do”

“he wants to earn lots of money”

“For now his enthusiasm works for me”

“I promised him a lot”

“I will feed him empty promises”

“Shit, then he will write me”

Records indicate the FBI never viewed him as a potential foreign intelligence agent for Moscow. Court documents also show that Page fully cooperated with the FBI as soon as he learned he had been duped by Russian agents. In his sworn 2015 complaint against Buryakov, FBI special agent Gregory Monaghan portrays Page — referring to him as “Male-1” — as a guileless victim, and described how Buryakov and other Russian agents tried to take advantage of the American businessman, who was unaware he was dealing with foreign spies.

The FBI agent further attested that the Russians never told Page they were “connected to the Russian government,” and that Page was only “interested in business opportunities in Russia,” where he had worked for years for Merrill Lynch and as an independent energy consultant.

In the end, the Russians were unable to recruit Page and never received any state secrets from him. Monaghan did not recommend espionage or any other charges against Page, who by all accounts acted as a reliable and trusted witness in the case. Far from being a Russian spy, Page was characterized to the court as someone who helped the FBI catch Russian spies.

Here, the FBI is warning Page about the Russians he is speaking to and cooperating with them. Page truly appears to be a classical naive American beguiled by the mysteries of working with Russians. (Been there, seen this many times.) The Russians play with American naivete.

One thought on “Dinner with the Ohrs”