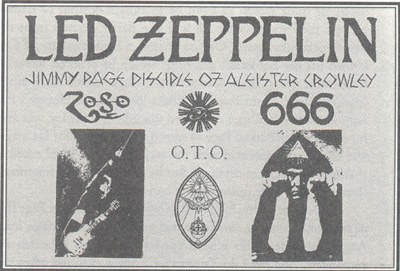 By AIM Patriot Don
.
Greetings Dear AIM Folks,
.
Saturday 18th at the bottom of your CAT Report, you informed us of Truth Seeker Gary Lite and magically there is a direct correlation between AIM, him, and me in that I had just sent you (& you distributed) the docs I had just discovered in my research on Allen Bennett (who brought Nepal Buddhism to London and was mentor for Aleister Crowley).
.
As I watched and enjoyed Gary’s video clip, I then stumbled upon his recent documentary on Led Zepplin. Wow, just wow!
.

The Curse of Led Zeppelin

To me this is so profound of a connection and discovery because as many others I was a follower of LedZep throughout my life and their music had a profound impact on my young teen years AND just now listening to Gary’s documentary on their cursed lives due to Page was basically following Crowley’s practice taught to him by Bennett on how to summon demons to blend with angelic spirits to improve the human condition – WELL, turns out Crowley aborted his practice before completing the year long ritual AND was said to have cursed the Boleskin House forever.
.
https://en.wikipedia.org/wiki/Boleskine_House
.
It is clear now that the practice Magick of the MAGE Crowley taught Page was where the song Stairway to Heaven was derived – Page was successful obviously in completing that which Crowley abandoned!
.

Jimmy Page: How Stairway to Heaven was written – BBC News

Below are the links from Don that we previously posted, mentioned above.

Just recently I went on a research bender into origins of Buddhism (am well studied and practitioner of Japanese Nichiren Buddhism) and in past read about Hitlers pilgrimage into Nepal where he was possessed by the wisdom of Aryans – and by chance recently digging into this realm again I banged right up against a Brit by the name of Allan Bennett, who is credited with bringing Buddhism to London in late 1890’s.

He was actually spiritual guide to the infamous Alister Crowley, Bennett learned from his mission in Nepal the secrets of early Buddhist practice whereby you could summons the evil spirits to work with your Good spiritual desires to transcend that which ails all of humanity (please see attached copy of THE BOOK OF SACRED MAGIC OF ABRAMELIN THE MAGE), Crowley was in the early occultist Hermetic Golden Dawn Society that consisted of the whose – who of London in the early 1900’s – about the same time-frame as the Pilgrim Society .

I am still in infancy in this research tract and suddenly I get a sort of spiritual feeling that indeed, these creepy Pilgrims must of certainly at least been aware of  GD Society because like the Pilgrims they were the aristocratic wealthy echelon of London at the same time-frame.

Hermetic Order of the Golden Dawn

3 thoughts on “The Curse of Led Zepplin”