Ok…this is crazy wild speculation from Betsy, but let’s take note that we are dealing with very evil people here. What is happening in the Senate this week with the impeachment hearings is GROUND ZERO for the take down of the globalists.

A ‘YES FOR WITNESSES’ is the end of the REPUBLIC! 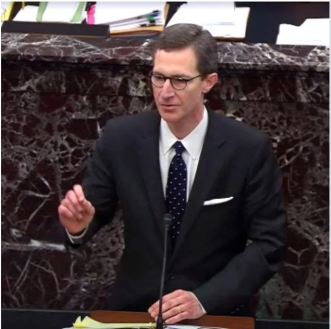 The globalists are using lawfare to destroy the Constitution. Thank goodness our lawfare warrior Patrick Philbin is defending the line!

This is how the Great Information War is being won – by American Patriots like Philbin, Jay Sekulow, and their team members.

Patriots, let’s step back and look at the battlefield…..from the enemy point of view. We need to think like bad guys who had that crazy notion of using airplanes filled with fuel to fly into buildings to collapse worlds. Think like an entrepreneur enemy.

Your mission, as an operative for the Evil Empire, is to take out as many enemies as you can. You aren’t able to get physical weapons into the building. All electronic devices are banned. The room is full of VIPs who are protected round the clock in their building with the best security the nation has.

How do you take them out?

How about running a scary narrative about a virus? Of course, your operatives have already patented the virus and its antidotes. You offer a vaccine that can save people from the horrific death of this particular flu strain.

You make sure to run propaganda narrative 24-7, showing images of people falling to the ground, bloody scenes. Then add some viral type messages that will scare even the trolls – beautiful Chinese women eating bat soup, wetmarkets filled with slaughtered dogs and ready-to-kill animals walking around on filthy ground, masses of people wearing face masks in crowded trains.

You add a touch of drama about quarantined cities and closed factories. Amazon reports that it has run out of face masks.

During the hearings, you shoot the camera away to a fake news talking head who is giving real time alerts about a scary pandemic in China. The AVID-ISIS Management propaganda scrolls at the bottom of the page – It’s coming to America. Then move back quickly to the hearings so that the listener’s subconscious has been programmed with converging ideas –

At the same time, government officials (yes, SES operatives who, like Eric Ciaramella, go ‘unnamed’) alert the president that he and top officials must be vaccinated. It’s urgent. It’s scary. It must be done now!

As an operative for the Evil Empire, you make sure that the Chief Justice of the Supreme Court is your top priority for vaccination. He acquiesces because he has been the Queen’s right hand man the whole time you were planning and running the overthrow on the President of the United States. You only need one carrier to get the killer bioweapon into the room to infect everyone. The infection velocity of Coronavirus is extremely high. Add the bioweapon to the virus strand and the hands of the killer will never be known.

They will blame Trump for the deaths of so many Senators by Coronavirus. He didn’t do as the SES operatives recommended – mandating vaccines for all. That’s what they will say as they crown Hillary to the American throne. Coronation.

Of course, as a student of the American Intelligence Media, you already know who developed the virus, its antidote, and – most important – the vaccine -a vaccine that actually carries the highly contagious bioweapon that is intended to kill your targets.

Coronavirus. Makes you think about crowns and other nonsense.

Now take your vaccine like a good boy, Johnnie.

“Why did this thought even come into my wee brain?” Betsy explains. “I kept noticing John Roberts coughing through today’s hearing on January 30 and remarked to Thomas-pain-in-the-ass-of-the-globalists – think he has the Coronavirus?”

The Coronavirus Traced to the British Crown

12 thoughts on “The Crown Attempts a Bioweapon False Flag”

Leave a Reply to Our Spirit Cancel reply